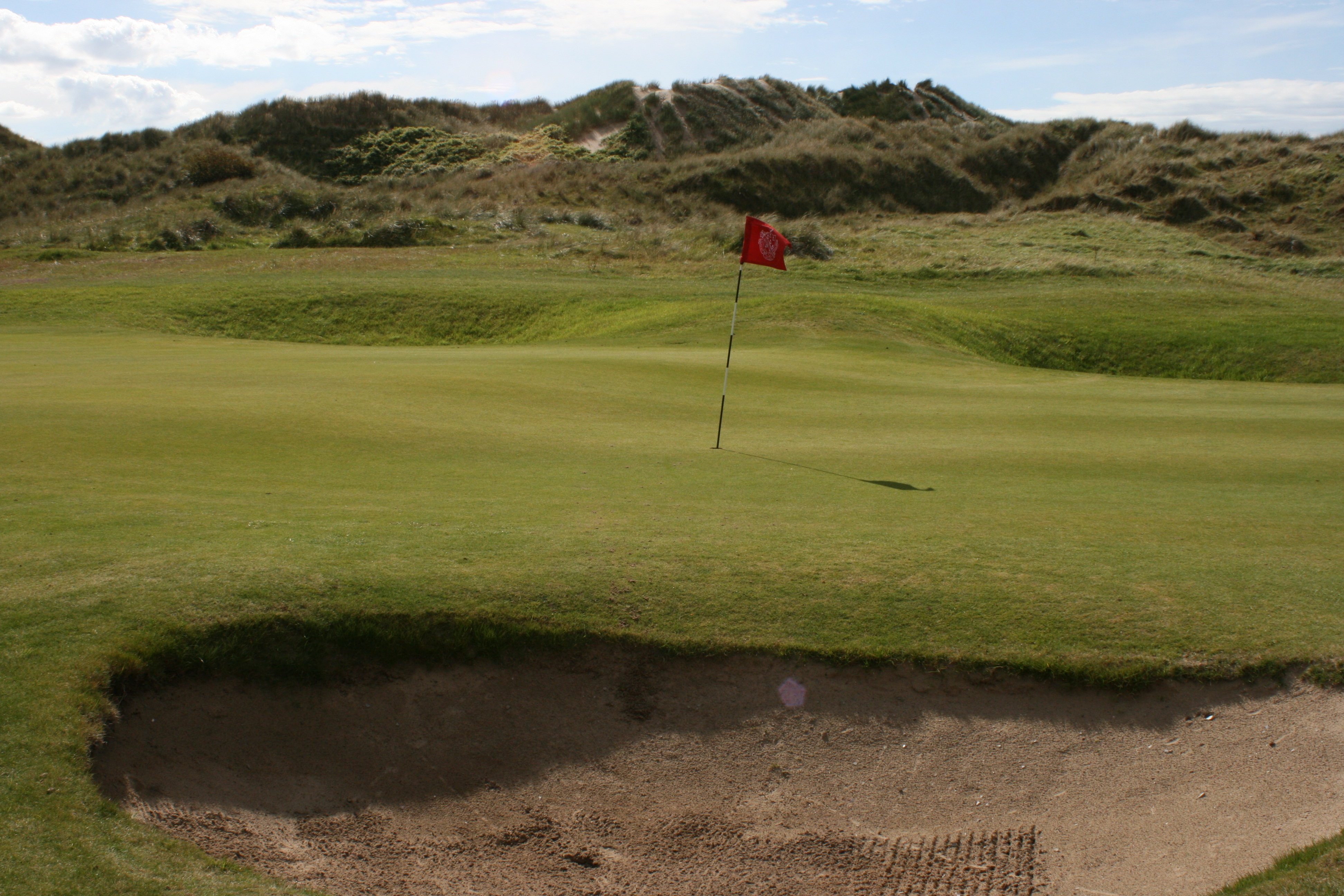 The beloved course of Bernard Darwin is still relevant

ABERDOVEY, Wales – Born in 1876, a grandson of Charles Darwin, Bernard Darwin was a gifted golfer who became the first reporter to cover golf on a regular basis, writing for The Times of London for decades starting in 1907, and serving as captain of the Royal and Ancient at St. Andrews in 1934.

And so when Bernard Darwin proclaimed Aberdovey Golf Club as the golf course his “soul loved best of all the golf courses in the world,” it commands attention.

An hour south of Harlech and Royal St. David’s Golf Club, golfers often take the train that runs along a scenic coastline between the two courses, and stops virtually right beside the first tee at Aberdovey. 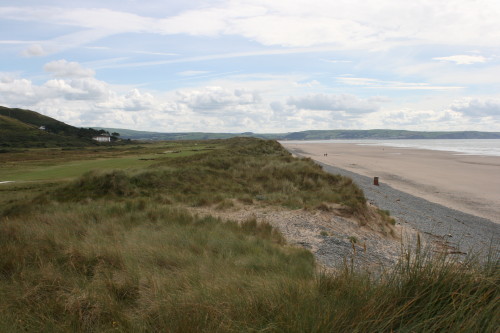 Dunes separate the sea and beach from Aberdovey Golf Club in Wales.

Aberdovey Golf Club was founded in 1892, so it’s one of the oldest clubs in Wales. The current course traces its roots to 1913, and a design by Harry Colt, later updated by H.W. Fowler and, in the 1930s by prolific course designer James Braid. (For marketing purposes, the course is part of the James Braid Trail.) It’s located at the top of what’s considered Mid Wales.

Like Royal St. David’s, Aberdovey is a course separated from the sea, Cardigan Bay of the Irish Sea, by dunes, and so you hear the waves throughout the round but glimpse the course but once, from behind the elevated green at No. 12. 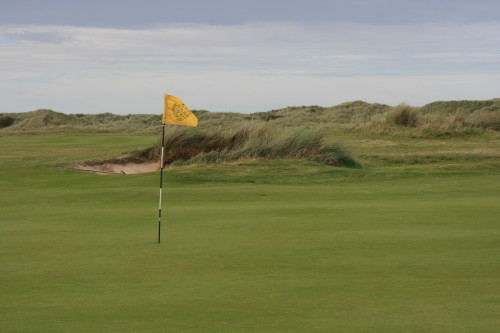 The seventh green at Aberdovey Golf Club in Wales.

There are bumps in the fairways, and thick rough, and when the sun came out Sunday, the fescue had a golden hue.

As recounted in “True Links”, a definitive book about the world’s links golf courses, “here we find a classic links returned to its natural glory in a remote and romantic setting, with many memorable holes, including the third, a blind par 3 known as Cader.”

Wrote John Hopkins in a 2005 story for Links Magazine: “When you arrive at Aberdovey today, there is no rush of young boys to carry one’s clubs, but in many ways what Darwin saw when he got off the train a century ago is the same scene that greets a present-day visitor. The 18th green is only a chip shot away from the clubhouse. Many tees adjoin greens of previous holes, as they do on the Old Course at St. Andrews.

“Golf at Aberdovey is a reminder of what the game was like in a bygone era, a time before noisy earthmovers scraped and shaped the landscape, before water was considered an essential element of a course’s defenses. As in those days, grazers here are allowed to bring their livestock onto the course (cattle in summer, sheep in winter).” 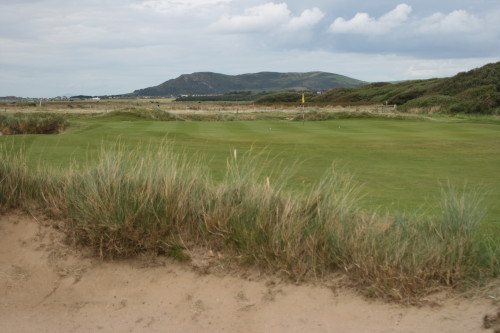 A bunker guards the green on the eighth hole at Aberdovey Golf Club.

Set in Snowdonia National Park, with its steep rocky cliffs, where sheep graze on high, and stone fences climb high, and stone buildings dot the landscape, Aberdovey is another Wales course in which the public freely crosses en route to the beach. There’s great beauty here, and a sense of peace.

It reinforces the opinion that we’ve developed on this trip — that there’s much more to North Wales than golf, and the golf is great value, making this a worthy destination for those who want to experience authenic links golf at a reasonable price. Greens fee at Aberdovey is just over 64 pounds, or about $100.

I played Aberdovey on Sunday,  thanks to the courtesy of Visit Wales, in the person of Jane Harris, with three Northwest journalists from the Seattle area — Blaine Newnham, the former sports editor and columnist of the Eugene Register-Guard and the longtime columnist for the Seattle Times and author of  “America’s St. Andrews” about U.S. Open site Chambers Bay; Tom Cade, senior director of communications for the Pacific Northwest Golf Association and editor of Pacific Northwest Golfer Magazine, who plays to a 2 handicap, and Rob Perry, of Bellevue, Wash., a professional golf photographer  who plays to a 3.6. 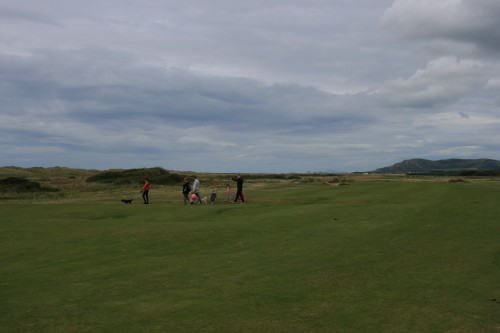 A family crosses the sixth fairway en route to the beach at Aberdovey Golf Club.

The course is challenging, the bunkers deceptive, some near the greens, some subtly farther away, deceptively. A par 71, it places 6,536 yards from the white tees, 6,091 yards from the yellows. Playing the whites, Perry was our medalist, with an 80 on my card, and in the daily match of former Register-Guard sports columnists, I managed a victory, to end our stay in Wales one down.

In fact, this 19-handicapper had his best round of the trip, an 88 from the yellow tees, with six pars, including the No. 1 handicap hole, the 504-yard par 5 No. 13 hole, and a birdie. I lost just one ball — on the last hole, darn! — and found two, bringing the final Wales total to 18 lost, over six rounds, seven found.

Monday, we head home. Look for a story and photos from our North Wales trip in the Eugene Register-Guard’s Golf Extra section on Tuesday, Sept. 22. 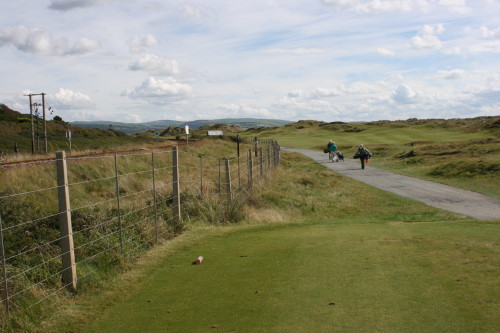 Train tracks run alongside Aberdovey Golf Club, with a depot near the first tee.