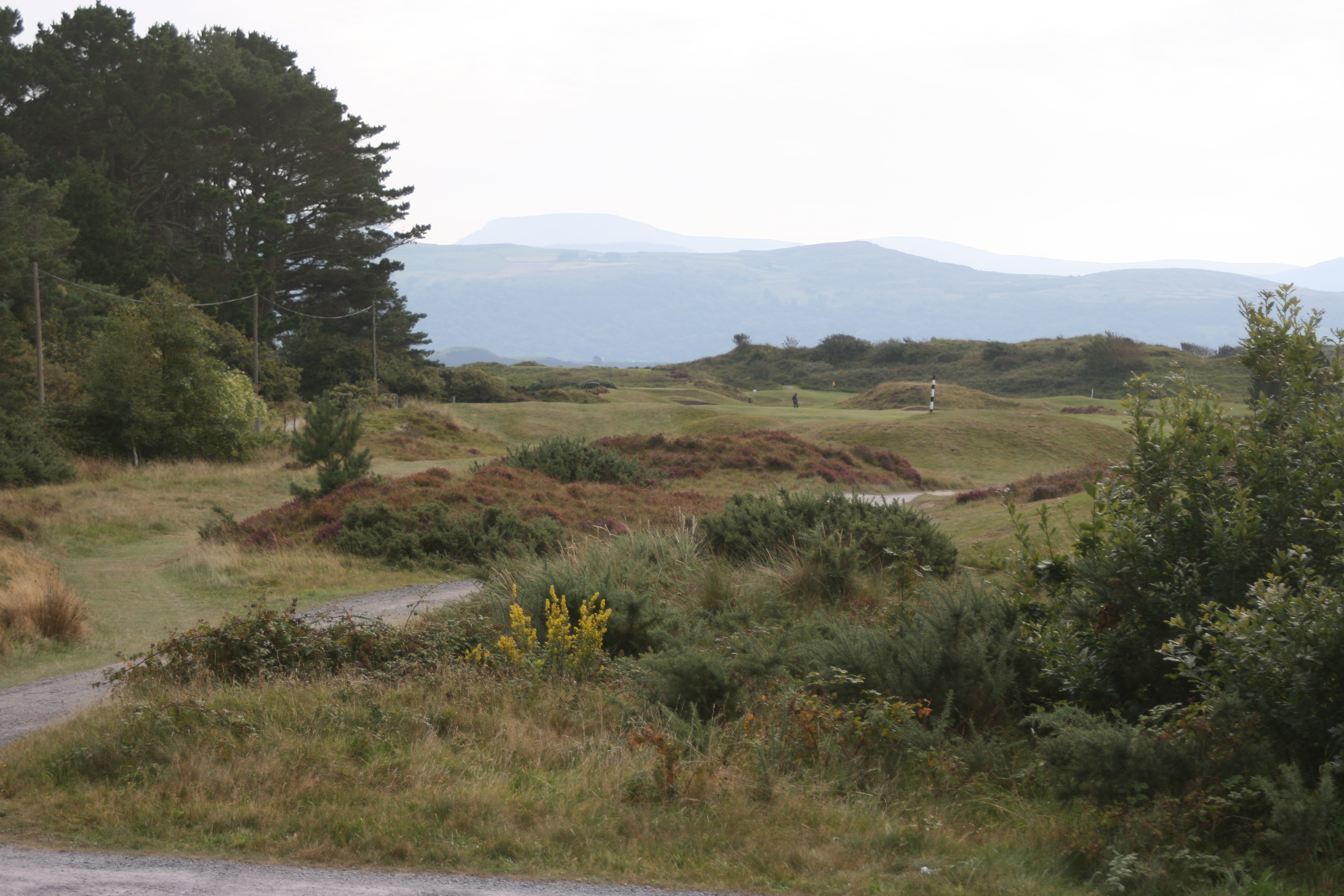 PORTHMADOG, Wales — It’s fitting that the inspiration for the classic story “Alice in Wonderland” came in North Wales, in Llandudno, about 90 minutes drive north of Porthmadog.

Because there is definitely a “through the rabbit hole” feeling playing Porthmadog Golf Club, a course that traces its roots to 1905 and an original design by golf architect James Braid, near the town of Porthmadog, at the beginnings of The Llyn, a peninsula that juts into the Irish Sea, just north of the castle town of Harlech. 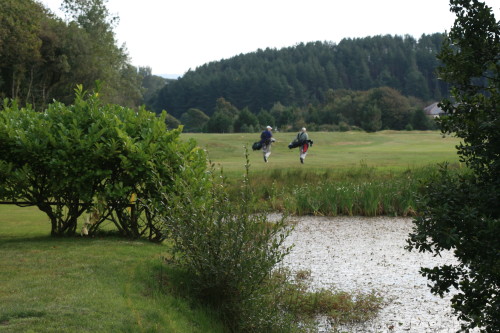 Rob Perry and Tom Cade on the seventh fairway at Porthmadog Golf Club.

For nine holes, golfers play a “heathland” course, with trees lining some of the fairways, and a pond on a par 3. The holes are challenging enough, but there is a sedate, almost peaceful feeling about the place, and you’re reminded of a course you might find in Portland, Or., or Seattle. 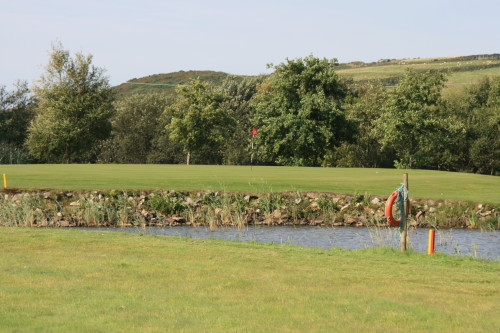 Then, after the ninth hole, the golfer crosses a road, passes the clubhouse, walks to the 10th tee — and immediately sees a wild and woolly links course, with sand and dunes and gorse, where the wind is par of the challenge, and the bounces big and capricious. Welcome to Wonderland.

In fact, that stretch of nine holes as been labeled “a miniature Troon,” and called “the most natural nine in Wales.” 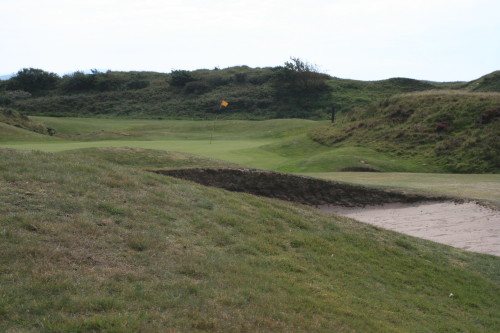 Certainly, the golf course wasn’t originally planned that way. When Braid laid out the course, to the extent that he did, it was all linksland, the holes clustered on the sea side of the road, true links holes. An old photograph, taken circa 1910, shows golfers playing on what now is beach on Samson’s Bay.

The heathland nine was added in the 1980s, Jones said, after the course lost land to the National Trust, which sought to preserve the coastline habitat. “We lost a few to the sea as well,” he said. 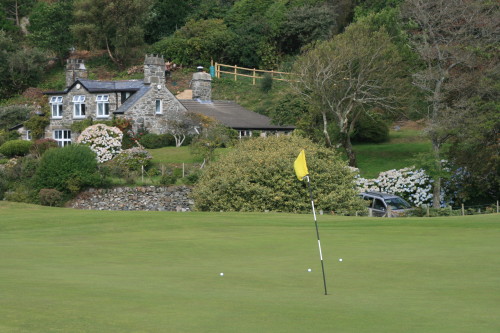 The 11th green at Porthmadog; the green surfaces were excellent.

Porthmadog (pronounced Port-mad-oc) draws most of its clientele from the United Kingdom, but there’s plenty to draw golfers and tourists to this area of North Wales, including Harlech Castle and the scenery of Snowdonia, and it seems the ideal destination for trips that would include golfers and non-golfers, and golfers of a range of handicaps. 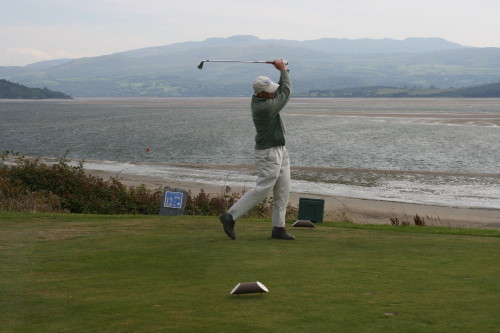 In a stiff wind, Tom Cade tees off on the par 4 No. 12 hole at Porthmadog.

From the 13th tee, a golfer can actually see Harlech Castle, and Criccieth Castle. “It’s probably the only tee in the world where you can see two castles,” Jones said, though I must admit that in the wind and caught up in golfing, I forgot to look. 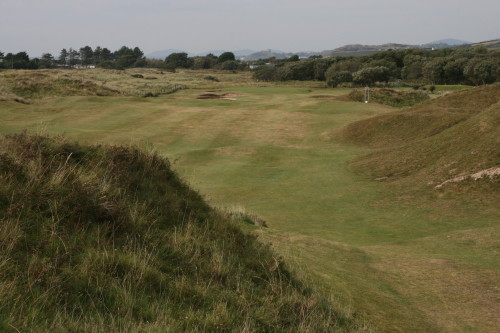 After a blind tee shot, this is what the golfer sees on the 14th hole, a par 4 called Himalayas, at Porthmadog Golf Club in North Wales.

For marketing purposes, Porthmadog is part of what’s billed the Snowdonia Golf Coast, along with Abersoch, Royal St. David’s and Nefyn & District Golf Club. “It does help for group booking,” Jones said. “It’s a way of getting people into the area and keeping them in.”

The course is also part of the James Braid Trail, celebrating the work of the prolific course designer.

I played Porthmadog on Friday,  thanks to the courtesy of Visit Wales, in the person of Jane Harris, with three Northwest journalists from the Seattle area — Blaine Newnham, the former sports editor and columnist of the Eugene Register-Guard and the longtime columnist for the Seattle Times and author of  “America’s St. Andrews” about U.S. Open site Chambers Bay; Tom Cade, senior director of communications for the Pacific Northwest Golf Association and editor of Pacific Northwest Golfer Magazine, who plays to a 2 handicap, and Rob Perry, of Bellevue, Wash., a professional golf photographer  who plays to a 3.6. 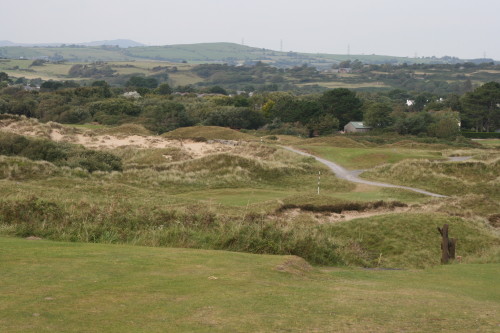 An aiming stick shows golfers the line to the mostly hidden par 3 13th hole, which usually plays into the wind at 187 yards at Porthmadog Golf Club.

It was certainly a challenge, especially on the back nine, when the wind came up, and not from the usual direction, holes that usually play with the wind going straight into it, and vice versa. With the wind on No. 13, 202 yards from the whites, a blind shot to a downhill par 3 green marked by an aiming stake at the back, Perry hit a 5-iron 229 yards, the ball flying ending up behind the green. Against the wind on No. 11, a 220-yard par 3, Perry crushed a drive, hitting it maybe 205, and came up short. 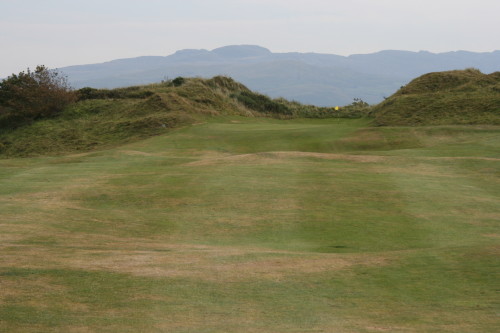 The green at the par 4 15th hole at Porthmadog is tucked between two dunes.

And so it went, quite the challenge. 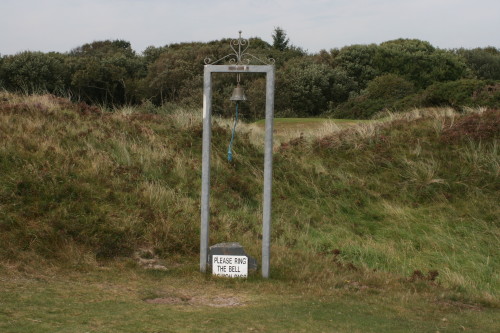 Golfers ring a bell to let the following group know it’s safe to hit their blind tee shot on the 14th hole at Porthmadog Golf Club in North Wales.

Perry was our medalist, with an 80 from the white tees, used in competitions and playing 6,322 yards to a par 71; Newnham and I battled to a draw the daily match-play of former Register-Guard sports columnists, though I remain 0-for-Wales against him. Still, playing the yellow tees, 6,011 yards, this 19-handicapper had a birdie, managed a 96 and lost only two balls, while finding two. (Four-day Wales total, 15 lost, four found.)

A good day of golf, and now we’re staying at Castle Cottage, part of which dates to 1585, which is right behind Harlech Castle, built by Edward I beginning in 1283.

Saturday we play Royal St. David’s, in view of Harlech Castle. After the best, sunniest week of the summer, according to locals, rain is in the forecast, another element of links golf to experience. 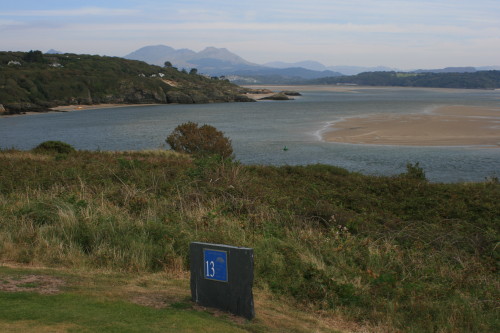 The view from the back of the 13th tee box at Porthmadog Golf Club.