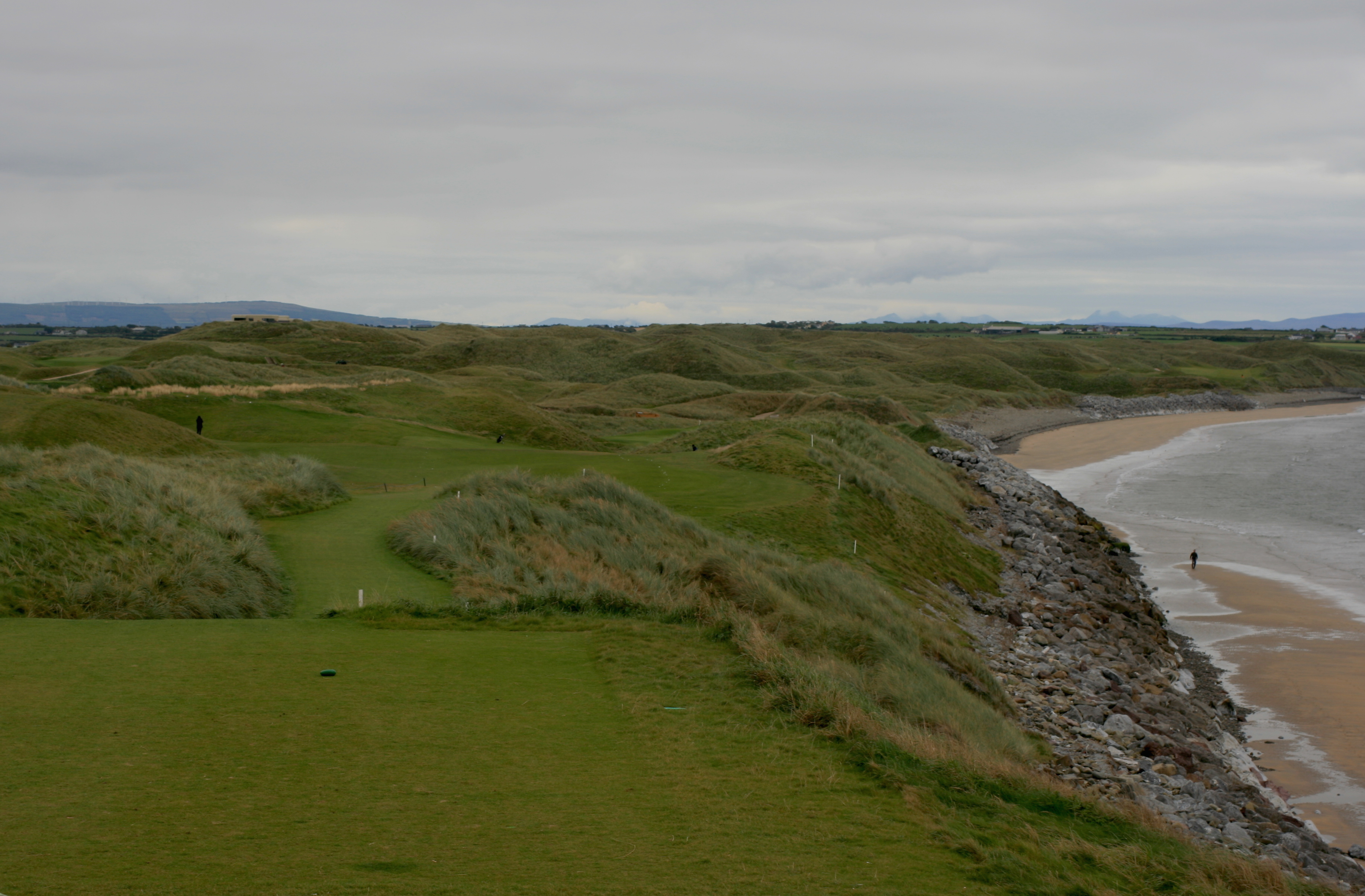 The drama builds on a world-famous course

Much to his dismay.

The fourth hole is a par 5, relatively simple — it’s the No. 17 handicap hole — except that there’s a narrow road (well, in Ireland, what road isn’t?) that runs along the right side of the fairway, and across the road is a row of houses.

Not one of my better drives, my tee shot on No. 4 soared high and sliced right, and we watched it cross the road and disappear from sight, out of bounds, and figured the ball lost to someone’s yard.  I hit another, and was walking up the fairway when Mr. O’Neill appeared along the roadside, waving me over.

Politely he explained that my shot had landed on the roof of his car, which was parked in his driveway, which he knew because he was standing near said car when the incident occurred, and could see the ensuing dent. Much embarrassed, I apologized, a lot, and he told me not to worry, that the club would cover any expenses, should he choose to repair the dent. (Later, another long-time club member confirmed that, noting that once, he was driving to the course on the same road when a shot smashed his windshield.)

Again, Mr. O’Neill was wonderful about it and urged me not to let it ruin my round. As we parted and I moved on, more than a little flummoxed, to my next shot, he soon called after me.

And gave me my golf ball back. 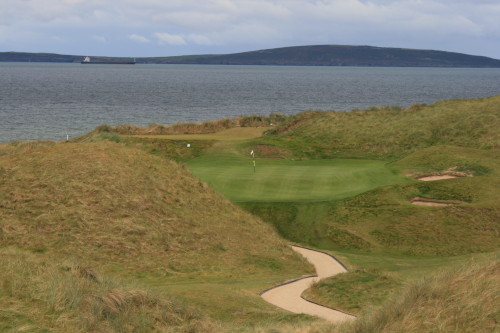 Other than maybe nearly injuring someone with yet Another Bad Shot, it was a wonderful, privileged day of golf at Ballybunion, world-famous, beloved by Tom Watson, icon praising icon.

In the book “True Links” the authors quote noted golf writer Herbert Warren Wind, who described the links as “nothing less than the finest seaside course I have ever seen.”

As the book notes: “The course threads its way between huge sand dunes scattered at random along a shoreline of outstanding beauty and splendor. This patch of County Kerry is classic seaside linksland, with crisp, firm turf spread across a panorama that is virtually treeless and totally exposed to the vagaries of the winds that sweep in unimpaired from the Atlantic Ocean. Established in 1893, the club was shut down for a few years, revived in 1906 with nine new holes, and expanded to 18 holes in 1927. The order of holes was changed in 1982, with the addition of a new course, the adjoining Cashen, designed by Robert Trent Jones. 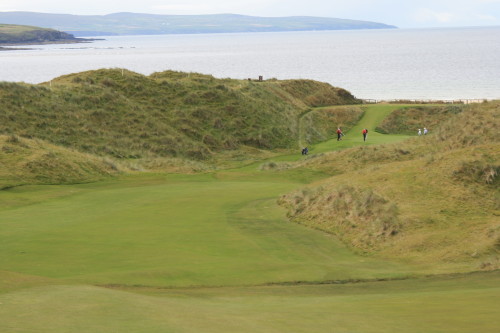 The view from the 18th green at Ballybunion, a par 4 called “Sahara.”

In the book “A Course Called Ireland”, author Tom Coyne’s hike around Ireland was a quest to return to Ballybunion. It was the end of his journey, and Coyne wrote: “I’m not going to tell you much about the Ballybunion links. If you’ve played it, you know. If you haven’t, I’m sorry. Other places I had visited were Irish links golf courses; to me, Ballybunion was Irish links golf. Bold but still subtle, grand without feeling pretentious, it was an ancient course where every inch still felt relevant.”

Last year, Golf Digest ranked the top 100 courses in the world, placing Ballybunion 27th: “Ballybunion has always been great, but it wasn’t until they relocated the clubhouse in 1971 to the southern end that it became thrilling. The move turned the old finish of anticlimactic back-to-back par 5s, into the fourth and fifth holes, and shifted the new closing holes to ones in spectacular dunes just north of the intersection of the Shannon River and the Atlantic Ocean.” 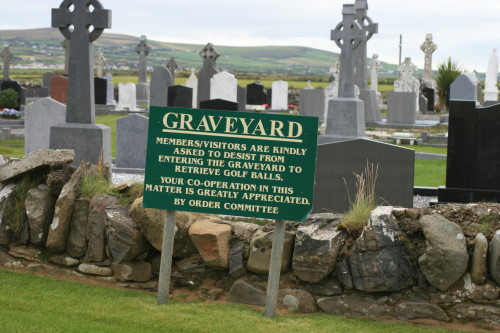 The first hole at Ballybunion passes a graveyard.

Thanks to the courtesy of Tourism Ireland, represented by Bernard McMullan, I played Ballybunion with three Northwest journalists from the Seattle area — Blaine Newnham, the former sports editor and columnist of the Eugene Register-Guard and the longtime columnist for the Seattle Times and author of  “America’s St. Andrews” about U.S. Open site Chambers Bay; Tom Cade, senior director of communications for the Pacific Northwest Golf Association and editor of Pacific Northwest Golfer Magazine, who plays to a 2 handicap, and Rob Perry, of Bellevue, Wash., a professional photographer of all things golf, who plays to a 3.6.

It was about a two-hour journey Thursday morning from our hotel in Lahinch, the Lahinch Golf & Leisure Hotel,  including a 20-minute ferry ride across the Shannon River.

Perhaps not surprisingly, given its stature as one of golf’s trophy courses, Ballybunion has an impressive, looming clubhouse that includes the gift shop and restaurant, and that seems out-of-context with the rest of the course, which is wild and woolly, old-time links golf, the course that Watson once said every golf course architect should visit and play before designing a course. In fact, the course starts out with the first hole passing an old graveyard — better if I’d hit a tombstone than Mr. O’Neill’s car, but I actually got a decent drive there. 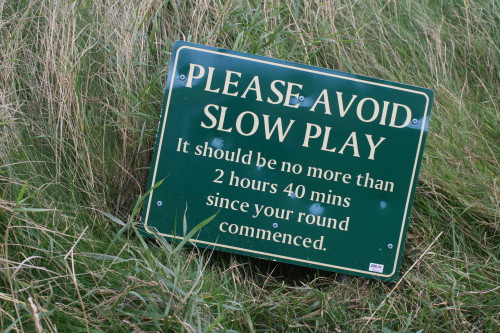 Telling golfers to hurry up, but politely.

In truth, the first five holes seemed relatively ordinary, passing the road and a trailer park before finally turning toward the Atlantic Ocean at No. 6, and after that, well, hold on. Tough holes, with mountainous grass-covered dunes and deep rough to punish mistakes; imposing par 3s (though I finally parred one of them, No. 14).

Watson has called No. 11, which runs along the water, one of the finest par 4s in golf. It conjures memories of holes at Pacific Dunes, for example, and while the Pacific Ocean off the Oregon coast is far more dramatic from a scenic standpoint, waves crashing below, this is an impressive, demanding hole, the No. 2 handicap, and I felt proud to get a bogey.

(Cade was the medalist in our group, with a birdie on No. 18 for a 79; Perry played even par over the last six holes for an 82; and I managed a back-nine 46 for a 101 and evened the daily match-play contest of former Register-Guard sports columnists at one Guinness each.  My lost-ball update: Lost 3, found 1, bringing the two-day total to 4-4.)

The weekday greens fee for Ballybunion Old Course is 180 Euros (65 Euros for the Cashen course), or roughly $200. The course will be closed from sometime in October until March, with the greens being torn up and fescue sod installed, replacing poa annua, a case of one of the world’s best courses striving to be even better. 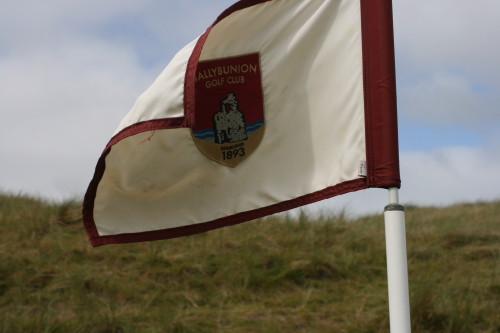 A perfect day for golf at Ballybunion, just enough wind to move the flags.