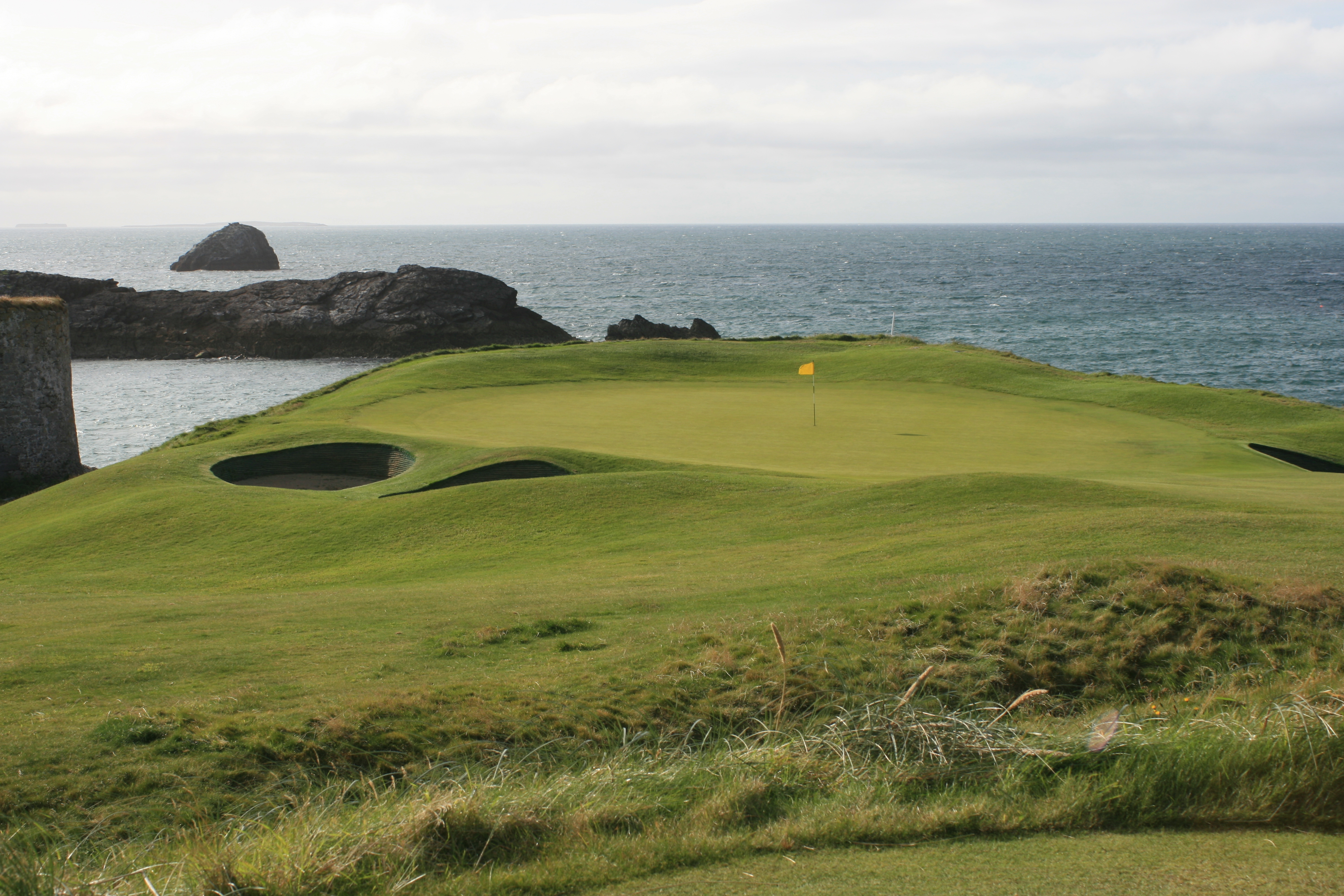 A visually stunning, and challenging, course on the Atlantic Ocean

BARROW, CO. KERRY, Ireland — Sometime Friday, perhaps, a golfer lost a ball in the rough between the first and 18th fairways at Tralee Golf Links, on the Atlantic Ocean in southwest Ireland.

The ball is a Taylormade No. 1, with a Golf Digest Volvo Open logo stamped on one side, and a Nature Valley logo stamped on the other. I found the ball late Friday, while locating my own tee shot on No. 18, an uphill par 5.

To the unlucky golfer who searched for that ball and failed, I can only say this:

Dude, I feel your pain.

And in between I lost eight golf balls. I lost one in deep rough right on the par 5 second hole, though while searching for it I did find a Titleist Pro-V1. I lost two on No. 3, a drop-dead-gorgeous par 3 when I hit long and left over the green, the wind pushing the tee shot over an embankment, and then skulled the ball I dropped across the green and over the cliff to the beach rocks below.

By the eighth hole, I’d lost two more balls and was down to the Titleist I’d found on No. 2. That got me through bogeys on No. and No. 9, and back to the turn, for a quick trip to the van for two more sleeves of Bridgestones. The plucky, but unlucky, Titleist lasted just one shot on the back nine, a well-struck tee shot on No. 10 that nevertheless found rough on the left side.

I did, over the afternoon, find a total of four golf balls, so my three-day total in Ireland is 12 lost, seven found, and by the end of the trip I could likely be playing with an all-volunteer assortment.

Golfing legend Arnold Palmer designed this course in the early 1980s — though golf has been played in Tralee since the late 1800s. Palmer has said that he designed the front nine, but that God created the back nine, a truly incredible series of holes, featuring dunes that resemble a mountain range and heroic holes along the coast.

If so, God must trust His ability with a driver, or have a legion of angels to search for errant shots. Because this course punishes bad shots, and even some not-so-bad ones.

Did I like this course? I loved it, every grueling minute of it. I’d read a lot about the magnificent back nine, and it lived up to that billing and surpassed it, but the front nine is wonderful in its own right. 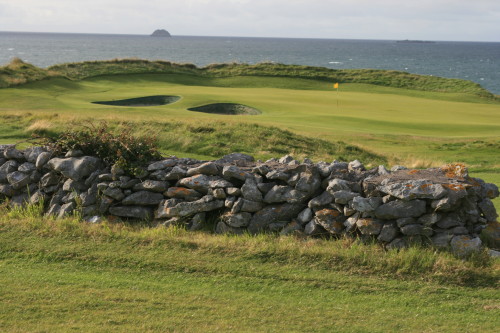 The second green at Tralee Golf Links in Ireland.

Thanks to the courtesy of Tourism Ireland, represented by Bernard McMullan, I played Tralee  with three Northwest journalists from the Seattle area — Blaine Newnham, the former sports editor and columnist of the Eugene Register-Guard and the longtime columnist for the Seattle Times and author of  “America’s St. Andrews” about U.S. Open site Chambers Bay; Tom Cade, senior director of communications for the Pacific Northwest Golf Association and editor of Pacific Northwest Golfer Magazine, who plays to a 2 handicap, and Rob Perry, of Bellevue, Wash., a professional photographer of all things golf, who plays to a 3.6.

As Tom Coyne wrote in “A Course Called Ireland”, “Tralee was a tale of two nines — Arnold Palmer said he was responsible for the front, but credited God for the back. … Placed on opposite corners of the beachhead, Tralee’s outward nine was a stretch of very strong golf holes, but they were just a warm-up for the madness that would ensue on the way in.”  As recounted in “True Links,” “in terms of pure scenery, Tralee is comparable to its neighbor Old Head, to Pebble Beach in California, or to Nefyn & District in Wales. Indeed, the film director David Lean was so smitten with the site that he used the first and second holes for several scenes of “Ryan’s Daughter.”” 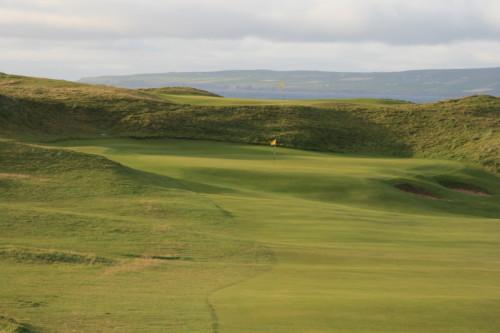 The No. 10 green in front of No. 17 green at Tralee Golf Links in Ireland.

Wrote Coyne: “… 15, 16 and 17 were a rumbling crescendo of beachside target holes, plates of short grass cut into the dunes and calling for our golf balls. At low tied, the beach to the right seemed to stretch on out to America. … There were a few special stretches around Ireland where I could take someone who didn’t know a links from a lollipop, and they’d walk a short while and say ‘I get it.’ … Tralee was one of them.”

No. 17, a 353-yard par 4, is cited in “The 500 World’s Greatest Golf Holes”: “The forced-carry tee shot is played to a fairway that can only be called rugged, and even that is an understatement. Playing the hole into a strong headwind requires a Herculean effort, which will be long forgotten upon reaching the small, highly perched green.”

On the back nine, Palmer’s Peak is a par 5 that climbs through a narrow opening of dunes. No. 13 is Brock’s Hollow, a par 3 framed by a huge dune; No. 16 is Shipwreck, another par 3, over a chasm, where in Friday’s wind, the most we’ve had so far, you aimed your tee shot over the ocean, and trusted that the wind would bring it back; improbably, with my 5 iron from 138 yards, it did just that. 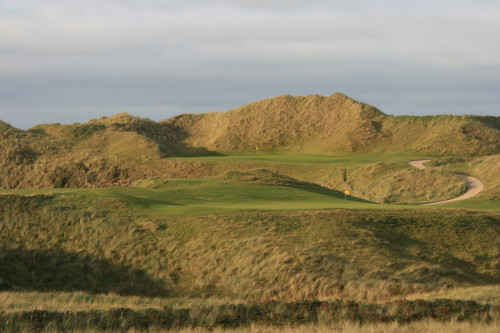 The 12th green and, behind it, No. 13 green at Tralee Golf Links in Ireland.

After our round, Perry and I went back to the course for photos, the wind growing, the players down to some hearty members. We watched a couple of gifted, delightful kids, young teenagers, playing an alternating match with their parents; the kids clearly have game. We watched a foursome play No. 16 from the blues, 197 yards in that wind, and three of them found the green. There’s a great feel to this place, from members to staffers to the good but not pretentious dining room with its view of the course.

Given the difficulty of the course, the Northwest media contingent, well, we battled. Perry, who plays to a 5, had two birdies and was the medalist on my card at 86;  Newnham won the Guinness in the daily match-play match of former Register-Guard sports columnists, going up 2-1.

A spectacular experience; what a treat to play this course, and what a great, late-night welcome we got afterward, at the Killeen House Hotel, in Killarney, where the term “hospitality” must have been invented.