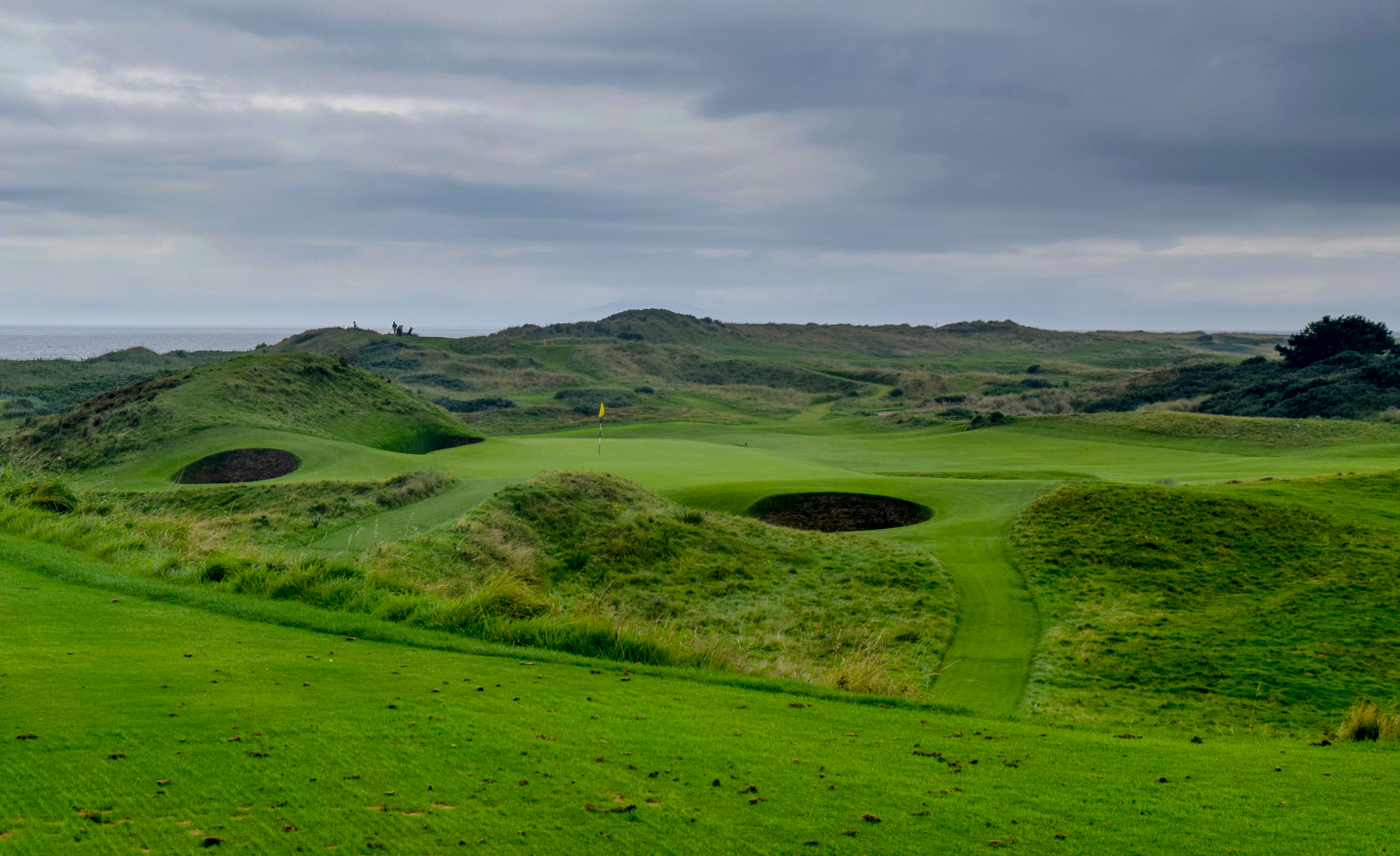 TROON, AYRSHIRE, Scotland — Trump Turnberry is more spectacular and beautiful. Prestwick Golf Club is older, more rugged, aggressively links golf. If you come to Ayrshire, on the west coast of Scotland, you must play those courses.

But if you can, you play Royal Troon Golf Club, too, on the edge of the Firth of Clyde, with its view of Ailsa Craig, that immense rock  out in the sea, because it is there, and has been since 1878.

Not that you can play it any day of the week; visitors — and the club gets about 5,300 or 5,400 visitor rounds a year — are restricted to certain hours in the morning and evening on Monday, Tuesday and Thursday. It’s in the club constitution; to allow more visitor play would require a vote of the members. But figure that those rounds, at just under $300 U.S. dollars, generate well over $1 million annually.

Dating to 1923, the Open Championship, known in the United States as the British Open, has been contested at Royal Troon nine times, including this year, when Henrik Stenson defeated Phil Mickelson on the final day, both playing spectacular golf — Mickelson’s 63 earlier in the Open set the official course record — the rest of the field far behind, an Open for the ages.

On the final day, Royal Troon’s head caddie master, Alan Patient, admitted that he was torn. He would have liked to have seen Mickelson’s name on the replica of the Claret Jug, that resides in the the lobby of the Royal Troon clubhouse. On the other hand, Americans had won the last six Open Championships held at Royal Troon.

“It was my first Open,” Patient said. “It was a fantastic experience. … “I was kind of rooting for it on the last day, I would like to have seen Mickelson’s name on the trophy, associated with here, but, to be honest with you, no offense, I was hoping it wasn’t going to be another American.”

The essence of the golf course that is Royal Troon today was laid out by Willie Fernie, head professional, in 1909. The two most noted holes, the short par 3 No. 8 hole known as Postage Stamp, and the par 4 No. 11 hole, called The Railway, along the tracks of the Glasgow-Ayrshire railroad line, date in their current form to that era. (At the suggestion of James Braid, two bunkers, including the narrow Coffin Bunker, were added to the Postage Stamp in 1923, to keep golfers from safely bouncing shots off the left slop of the dune and on to the green.)

Among the rich trove of memorabilia in the Royal Troon clubhouse is the 5-iron that Gene Sarazen, at age 71, used for a hole-in-one in the Open at Postage Stamp in 1973.

As Royal Troon golf historian Douglas McCreath told the New York Times before this year’s Open: “It’s quite amazing that these two holes from 1909 still feature as iconic holes in the year 2016.”

There is a distinguished, Old World formality to Royal Troon — members wearing jacket-and-tie to and from the course, the impeccably-appointed locker room, the members-only Smoking Room, though no one is allowed to smoke there anymore.

But the members (750 to 800, with various degrees of involvement) have their fun; Prestwick almost adjoins Royal Troon, behind the ninth hole, where just a 10-minute walk separates the two old golf courses. Recently, members of Prestwick and Royal Troon staged a two course competition, the Prestwickers playing nine holes out to Royal Troon, nine holes there into the clubhouse, and then reversing the rout after lunch, and the Royal Troon members doing the same in the opposite direction.

Suffice to say, with libations at lunch, the afternoon 18s didn’t exactly start on schedule.

Royal Troon is ranked No. 49 in the world by Golf Magazine. The noted golf writer, the late James W. Finegan, wrote: “Troon is as classic an example of links golf as is to be found: an out-and-back in design with rumpled fairways, grass-covered sand hills, punishing rough, gorse, and remorseless revetted bunkering.”

But it’s fair to say Royal Troon has its critics, too. Wrote Finegan:

“Troon is too frequently dull. The first six holes, more or less level, march straight out. The last six holes, also more or less level, march straight in. Despite the necessary differences in length … the holes are too much of a piece. There’s a sameness about them that borders on monotony. Understand they are challenging, rigorously so more often than not. But exhilaration is hard to come by.

“As for the middle six, ah, they are another matter altogether. Here we find originality, character, drama. In a couple of instances, they are unnerving simply to look at. But even more to the point they are a delight to play.”

Colin Montgomerie, whose father was club secretary from 1987 to 1997, was quoted by Finegan as saying that “Royal Troon is more difficult than good.” The par 71 course plays 7,208 yards from the championship tees, 6,632 from the whites and 6,170 from the yellow markers.

Fitting that the club motto, “Tam Arte Quam Marte,” means “As much by skill as by strength,” because here you need both.

At the invitation and intercession of David Connor of VisitScotland, I played Royal Troon on Wednesday with three Northwest colleagues in golf journalism:

Former Register-Guard sports editor and columnist (and then of the Seattle Times) Blaine Newnham, one of the most respected golf writers in the Pacific Northwest, author of “America’s St. Andrews” about the construction of Chambers Bay and a friend and mentor to me throughout my career; Tom Cade, director of communications for the Pacific Northwest Golf Association and editor of Pacific Northwest Golfer Magazine, and Rob Perry, the immensely gifted photographer (and golfer) who specializes in golf courses.

Finegan’s assessment was not unduly harsh. The most varied, compelling holes start at No. 7, a dogleg par 4 from an elevated tee, followed by Postage Stamp, just 114 yards from the yellow tees that Newnham and I played (123 from the whites where Cade and Perry played) and full of danger, then the 10th, a par 4 to an elevated green, and then to 11, where the trains roll by on the right side of the fairway, reportedly with reinforced windows to protect against errant shots.

Not that I would have posed any danger, because my tee shot on that hole went so far right that it cleared the tracks with ease, my only lost ball of the day (updated Scotland count, 9 lost, five found) and the second one that I deposited somewhere on the Glasgow-Ayrshire rail line, having done so at Prestwick two days earlier.

In my inept assault on the iconic holes of Scotland, I also found the Coffin Bunker on the left side of Postage Stamp, the bunker so deep and narrow that the golfer can barely get a stance. Somehow, I got my ball out (not sure how, my eyes might have been closed, fearing the ball would slam the side wall and bounce back at me) held it on the green, nearly holed out a sandy par, and took a satisfying bogey.

Certainly, Royal Troon is a challenge. Errant shots are punished. Bunkers are plentiful. Both Cade, a 1.4 handicap, and Perry, who plays to a 4.4, who have shot in the 70s at other Scotland courses, settled for low 80s Wednesday. Newnham hit the ball well and managed a 91; I was four shots adrift, at 95, with two pars and a birdie on the par 3 No. 14, my first in Scotland, and Newnham won the daily match-play competition of former Register-Guard sports editors, 3-and-2, to go 1-up for the trip.

And with that, we bid farewell to Ayrshire and the west coast of Scotland, driving to the east coast of Scotland, the Kingdom of Fife, north of Edinburgh on the Firth of Forth, near St. Andrews, where on Thursday we will play highly regarded Kingsbarns, in this land famous for 19th century golf courses a mere infant, born in 2000.