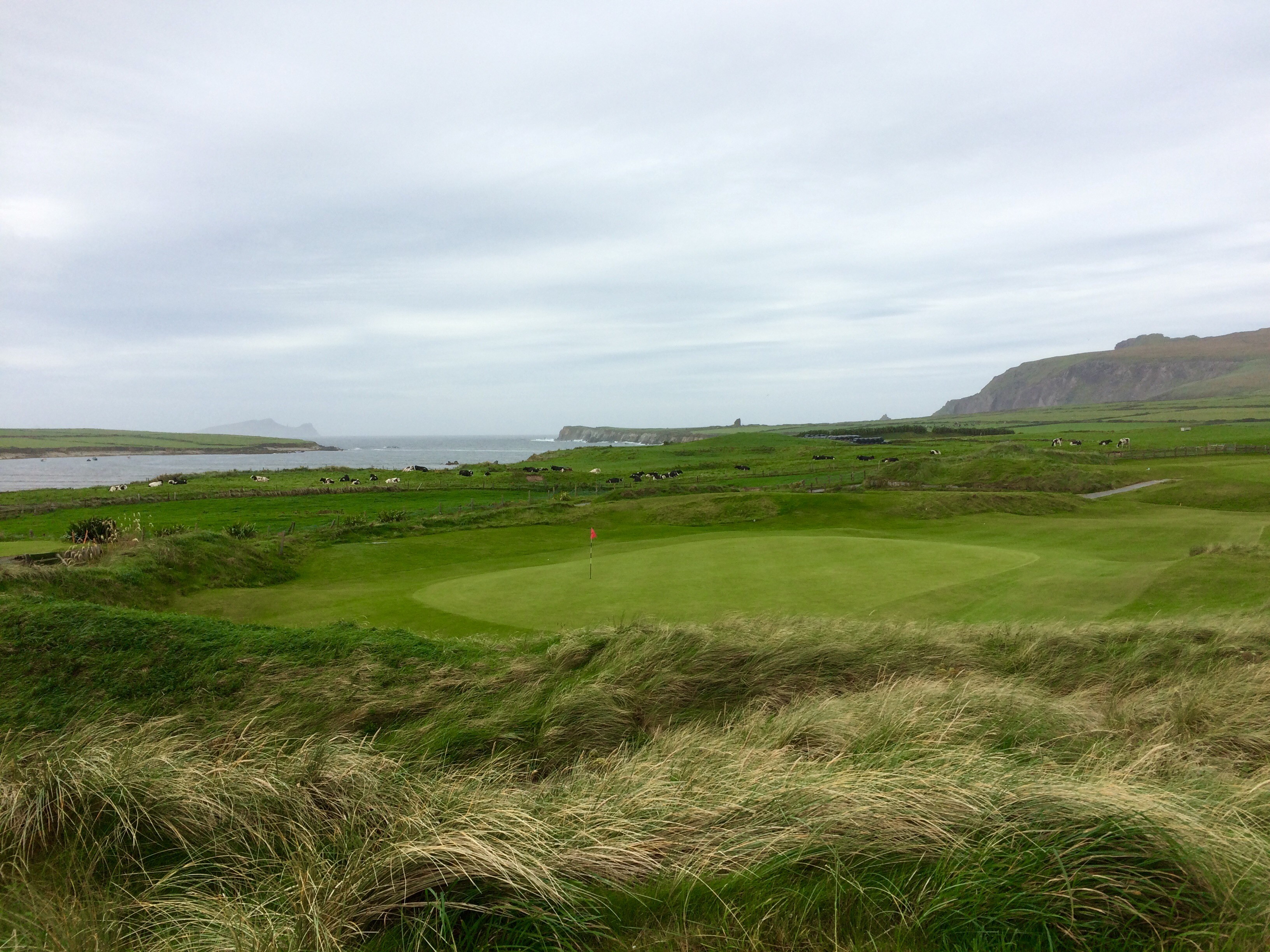 Sixth in a series by the golf writer, who finds Dingle (Ceann Sibeal) to be classic Irish links.

BALLYFERRITER, CO. KERRY, Ireland — You’d go to the end of the earth for one more memorable round of golf.

But this was above and beyond. We were headed for what was not only the western-most course in Ireland, but an appropriate – and spectacular – set for the recent Star Wars film.

For a month or more last summer, those playing the much-underrated Ceann Sibeal (Dingle Golf Links) could look to the towering headlands nearby and view the building of a sixth-century monastic Jedi village.

First is the drive onto the Dingle Peninsula via perilous and spectacular Conor Pass to a moonscape area called Ceann Sibeal, where Gaelic is still the first language of the area and its people.

This is where we find a wonderful golf course, Ceann Sibeal, a 1970s layout created initially by the legendary Irish architect Eddie Hackett whose personal crusade was to build quality courses throughout rural Ireland.

He helped communities along Ireland’s rugged Atlantic coast make the most of sad, salty lands, replacing sheep with golfers and tourists. He was behind the building of the sublime Carne and Connemara courses, and Waterville. He did Enniscrone.

The funny thing about Ceann Sibeal is that as remote and spectacular as it might be, it is also at the same time friendly, almost intimate.

The golf course isn’t far at all from the colorful and ancient village of Dingle, which abounds with traditional Irish culture, from meals to music.

We met briefly with the officials of the women’s club at the course’s comfortable clubhouse and they responded by singing happy birthday in Gaelic to one of our party. Between the men’s and women’s club, Dingle has nearly 500 members.

But hardly a visitor from the United States. When we visited, thanks to Tourism Ireland, we asked the club’s general manager how many golfers from the U.S. he’d seen so far this year, and he said, “You are the first.” It was September.

While it has a window on what is called The Wild Atlantic Way and the Blasket Islands in the distance, for me Ceann Sibeal was more about the nuances of links golf than about spectacular scenery.

The course originally bordered the shore but lost its lease and rebuilt years later some 10 miles out of town. Hackett was assisted by Ryder Cup hero Christy O’Connor Jr.

The course isn’t directly on the coast, but instead rambles along and over a creek (or burn) that influences at least half the holes.

It seems obvious that little sand was moved as the course was built. For the most part, what you see is what you get.

The greens are smooth and quick, the fairways firm; it is just a demanding introduction to links golf.

It is a thinking person’s course, assailed only by those who make good decisions as well as good shots. But to its credit and our enjoyment, nothing overwhelms. Golf truly the way it was meant to be played.

With summer green fees less than $100, Ceann Sibeal is worth a visit when half the fun is getting there and just looking around.

Infatuated by links golf, Blaine Newnham has played the great courses of the British Isles, from St. Andrews and Royal Dornoch in Scotland, to Royal Porthcawl in Wales, to Lahinch and Ballybunion in Ireland. He was a sports editor and columnist for 11 years with Oregon’s Eugene Register-Guard, and an associate editor and sports columnist for The Seattle Times for 23 years. In 2014 he authored the book America’s St. Andrews, chronicling the birth of Chambers Bay and its lead-up to the 2015 U.S. Open. In 2005, Blaine received the Distinguished Service Award from the Northwest Golf Media Association, and is a regular member of the Golf Writers Association of America.