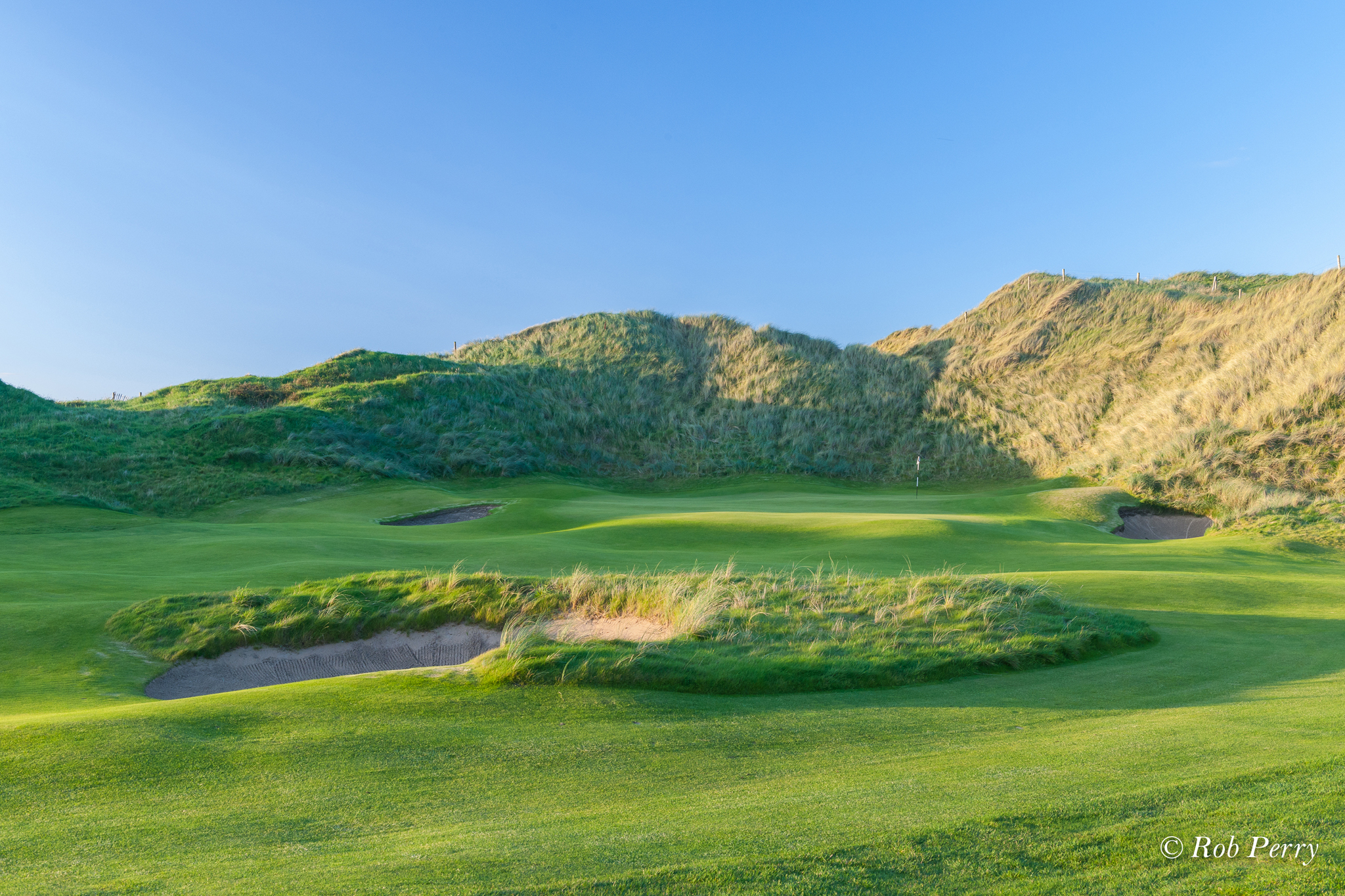 Second in a series on golf in Ireland by the veteran golf writer, with photography by Rob Perry

On the second day of our recent trip to Ireland, we played Trump Doonbeg, the course Donald Trump bought in a fire sale in 2014.

To the delight of many, the story here seems no longer the owner, but the course. Doonbeg has been turned into a terrific links layout by Trump.

There is no question Trump’s influence on golf in Ireland and Scotland has been major. He built Trump International near Aberdeen in Scotland, retooled Turnberry into a grand resort and rescued Doonbeg from bankruptcy.

On this trip, under the auspices of Tourism Ireland, I found it comforting if not cleansing to make a quick scan of the merchandise in the pro shop and find the logo “Doonbeg” and not Trump on most things. When Trump first bought the course he re-named it Trump International Golf Links Ireland, in keeping with the Trump International Golf Links Scotland (in Aberdeen). There initially was no mention of the course’s original name or the village it was named after.

The resort opened in 2002 at a cost of $32 million, and Trump bought the resort in 2014 for about $9 million, which included the course, a magnificent hotel, and nearly three miles of gorgeous oceanfront land.

He showed up to make the purchase a few days after a vicious storm left seaweed in the middle of the 18th fairway and ruined three greens. His proposal to create a stone levy along the beach to protect the course, a common practice that has been successful for many other seaside links courses in Ireland and Scotland, was halted by local authorities, although the idea is still being discussed.

So the focus turned to the revival of the course by English architect Martin Hawtree, who in the Southwest Ireland area alone had done major work at Lahinch and Dooks.

Trump called Hawtree, whom the R&A entrusted to tweak the Old Course at St. Andrews, and who had designed Trump’s new course near Aberdeen.

“It was a sight to see,” said pro Brian Shaw of Trump and Dr. Hawtree together. “The Boss is a big man and Hawtree looks a little like Harry Potter.”

The results at Doonbeg are stunning. The course is at the same time spectacular and subtle, with a grace of flowing, grass paths meandering through the dunes and the exhilaration of oceanfront views.

Leery of Trump in the beginning, the locals now seem relaxed and hopeful. Nearly 300 people, mostly from the local area, are employed on the property.

“We’ve had a spike in play of 30 percent this year,” said Shaw, which comes after a published loss of $2.3 million in 2016, a result of the course being closed for several months during Hawtree’s renovations.

And to top it off, they once again call the course Doonbeg.

Originally designed by Greg Norman, Doonbeg begins with one of the game’s great opening holes – a par-5 into the face of a four-story dune located behind the green. A par-3, the 7th, is played in an amphitheater that looks as if were made by a meteorite.

The course, in fact, has some of the best views in Ireland and the UK. Because its beautiful beaches are dangerous for swimming, they have remained relatively pristine and bereft of the ubiquitous caravan parks that cuddle up to many of Ireland’s great courses.

Infatuated by links golf, Blaine Newnham has played the great courses of the British Isles, from St. Andrews and Royal Dornoch in Scotland, to Royal Porthcawl in Wales, to Lahinch and Ballybunion in Ireland. He was a sports editor and columnist for 11 years with Oregon’s Eugene Register-Guard, and an associate editor and sports columnist for The Seattle Times for 23 years. In 2014 he authored the book America’s St. Andrews, chronicling the birth of Chambers Bay and its lead-up to the 2015 U.S. Open. Blaine received the Distinguished Service Award from the Northwest Golf Media Association, and is a regular member of the Golf Writers Association of America.