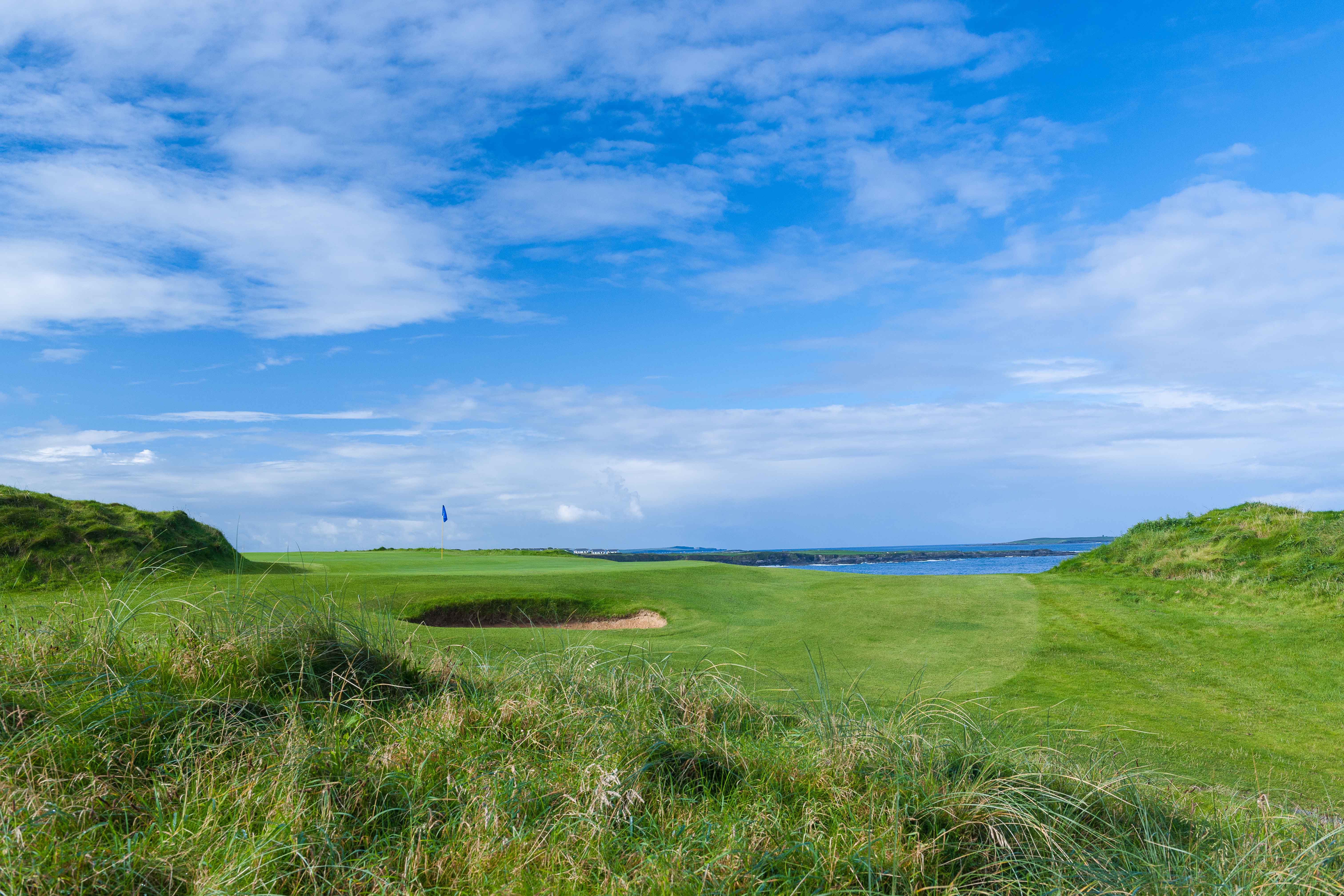 The eighth hole at Spanish Point Golf Club is a short par 3 with a two-tiered green known as “Terror”. (Rob Perry)

Fifth in a series by the noted golf writer, with photography by Rob Perry

MILTOWN MALBAY, COUNTY CLARE, Ireland — Over the years I’ve had as much fun discovering the hidden gems of the British Isles as playing the great courses.

Places like Ardglass in Northern Ireland, Royal St. David’s in Wales, Portsalon in Ireland, Crail and Elie in Scotland.

This latest trip, under the auspices of Tourism Ireland last September, produced another, and the find was not even 18 holes.

As usual, we’d flown all night from the Pacific Northwest, arriving at Shannon Airport and spent much of the morning getting settled in Lahinch, where the next morning we would play the famed old course.

We had a choice on this first day in Ireland of taking a nap or finding a place to play. We weren’t here to nap.

So we headed maybe 20 minutes down the road to Spanish Point Golf Club and its lovely views of the Atlantic and its grisly place in world history.

It was in 1588 that ships of the Spanish Armada were lost in a storm. Depending who rescued them the surviving Spanish sailors were either hidden by the Irish or hung by the English.

Now, for well over 100 years, they’ve played nine holes of golf at Spanish Point, nine holes slipping through the dunes, overlooking the ocean, a course of great greens and great fun.

You walk away remembering the green that butts right up to the parking lot. Or the view from Hangman Hill, also known as the ninth tee.

Or especially the eighth hole, barely 100 yards but the deserved bearer of the name “Terror” because it had wrecked so many rounds.

But mostly you remember the people, the friendly, cost-conscience members and their one-room clubhouse where the merchandise consists of a single rack of apparel.

They weren’t selling golf balls or clubs. They’d run out. They were, however, well stocked with Guinness and Bushmills.

You just knew this was a place you’d enjoy playing. Great location, great tradition, $25 green fees, friendships being reunited at the start of every summer season.

Infatuated by links golf, Blaine Newnham has played the great courses of the British Isles, from St. Andrews and Royal Dornoch in Scotland, to Royal Porthcawl in Wales, to Lahinch and Ballybunion in Ireland. He was a sports editor and columnist for 11 years with Oregon’s Eugene Register-Guard, and an associate editor and sports columnist for The Seattle Times for 23 years. In 2014 he authored the book America’s St. Andrews, chronicling the birth of Chambers Bay and its lead-up to the 2015 U.S. Open. In 2005, Blaine received the Distinguished Service Award from the Northwest Golf Media Association, and is a regular member of the Golf Writers Association of America.