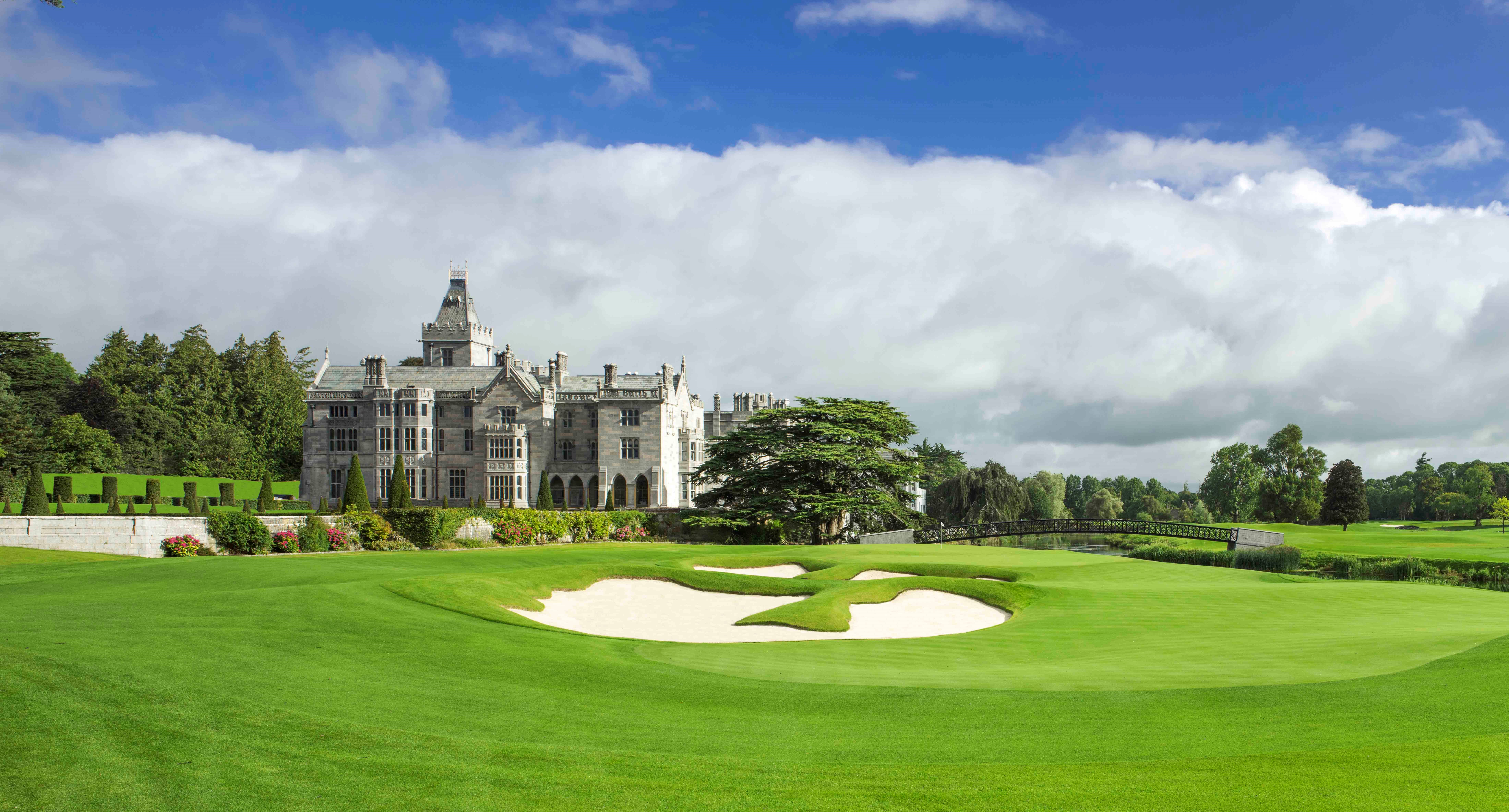 How badly does the stately and spectacular Adare Manor want to host the 2026 Ryder Cup for Ireland?

Badly enough to use “the finest Scottish sand” in the renovation of its golf course and brag about it.

Stone by stone, the early 19th century manor house (we would call it a castle) has been transformed into an elegant resort on more than 800 secluded acres about 20 minutes from the international Shannon Airport.

It wants to be the beginning or the end, or both, of high-end golf trips to Ireland which are played mostly on wind-swept links courses.

Scheduled to open for play in the spring of 2018, Adare Manor Golf Club, which we visited thanks to Tourism Ireland,  is not about links golf. Indeed, it is closer to Augusta National than Ballybunion.

Race horse mogul JP McManus, the owner of Adare Manor, has set his sights on the next available Ryder Cup date, which is 2026. Clearly, the Europeans are ready to move their sites beyond the United Kingdom – the competition next year will be played in Paris, and four years later, in Rome.

Adare Manor will be TV ready – in fact, it already is. Access to the property, parking, space for galleries, underground utilities, and room for large bleacher seating are already planned for.

As far as everyday golf goes, the course hopes to lure play for those desiring a more conventional and yet spectacular golf experience.

The money spent by McManus on the renovation of the entire Adare Manor complex is said to be $100 million.

But McNanus wanted to modernize and improve upon what was already a good setting.

To that end, he employed American architect Tom Fazio, whose work at Waterville Golf Links, about an hour south of Adare, was wonderful.

At Adare, Fazio removed trees (lots of trees), sand-capped the fairways, planted wall-to-wall bent-grass greens and perennial rye grass tees and fairways and ordered there would be no rough. None.

What we have is a course everyday golfers can handle and pros will love.

They spared no expense to eliminate any suggestion their inland course might be soggy from Irish weather, even installing the vacuum system – the same that Augusta National has – to suck out moisture under all the greens.

A Republic of Ireland course can’t host an Open Championship because the country is not associated with the R&A.

But it could host the Ryder Cup, and Adare stands ready, although a fire that destroyed the clubhouse pushed back opening until 2018.

Make no mistake, Adare is high-end living and high-end golf. A round at Adare will set you back a bit, and includes the mandatory use of a caddie.

While the Southwest of Ireland will always be known for its great links courses, the renovations at Adare and Waterville and the sheer beauty of Old Head should create quite a helicopter-in and helicopter-out kind of following.

Infatuated by links golf, Blaine Newnham has played the great courses of the British Isles, from St. Andrews and Royal Dornoch in Scotland, to Royal Porthcawl in Wales, to Lahinch and Ballybunion in Ireland. He was a sports editor and columnist for 11 years with Oregon’s Eugene Register-Guard, and an associate editor and sports columnist for The Seattle Times for 23 years. In 2014 he authored the book America’s St. Andrews, chronicling the birth of Chambers Bay and its lead-up to the 2015 U.S. Open. Blaine received the Distinguished Service Award from the Northwest Golf Media Association, and is a regular member of the Golf Writers Association of America.